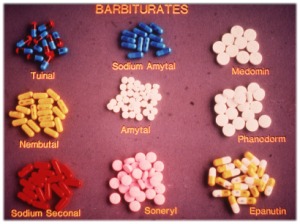 Barbiturates/ Tranquilizers
barbiturate , any one of a group of drugs that act as depressants on the central nervous system . High doses depress both nerve and muscle activity and inhibit oxygen consumption in the tissues. In low doses barbiturates act as sedatives , i.e., they have a tranquilizing effect; increased doses have a hypnotic or sleep-inducing effect; still larger doses have anticonvulsant and anesthetic activity. The mechanism of action on the central nervous system is not known. The barbiturates are all derivatives of barbituric acid, which was first prepared in 1864 by the German organic chemist Adolf von Baeyer.

How they are taken:
Most barbiturates come in powdered form and are sold in coloured capsules which are swallowed. they are also available as ampoules, suppositories or syrup. tranquillisers are as usually available in pill form, but are sometimes injected.

How long do effects lasts?
The effects of barbiturates can last from 4 to 16 hours or longer. Symptoms of use may gradually fade over the week after use, depending on the dose. Use over a period of time usually builds up tolerance to the drugs, so users must take larger doses to get the same effects. When users take the drug daily for more than a month, usually beyond the therapeutic dose, the brain easily develops a need for the drug. When a user is psychologically addicted to the drugs, finding and using the drug becomes the focus of life.

Effects of Barbiturate Consumption
Small doses of barbiturates cause drowsiness, intoxication, and lack of inhibition. Higher doses can result in staggering, slurred speech and confusion. The drug can be fatal if taken in extremely large quantities when people just stop breathing. They sometimes lead to a problem in thinking straight or paying attention. Constant falling, bruised legs, nervousness, shaking, noise sensitivity, restlessness, sweating, hallucinations and insomnia are some of the obvious symptoms that you can notice when someone is addicted to this class of drugs.

The risks barbiturates:
Barbiturates have many risks, dependence can develop and sudden withdrawal from high doses can result in death. effects of withdrawal are irritability, nervousness, delirium, sleeplessness, fainting, sickness, twitching and even fits. Overdose is an easy mistake caused by just a few extra tablets as a normal dose is very close to a lethal dose.. very dangerous when mixed with alcohol.

The risks tranquillisers:
Tranquillisers also have many risks. alertness is reduced and driving is affected. Tranquillisers release aggression and can cause convulsions. takers quickly become dependant. When mixed with alcohol, may cause coma and death, overdose is a very real threat. Tolerance can develop quickly so larger doses are needed to get the same effects. Withdrawal from regular use can lead to anxiety, nausea and confusion.

Usage by youth:
Even though barbiturates were mainly drugs of abuse during the ‘60s and ‘70s, there has been a moderate resurgence of use of barbiturates by youths during the last ten years. This is in part because of the popularity of stimulant drugs and the use of barbiturates to calm agitation during withdrawal. Because barbiturates have a longer duration of effects, they are not the most popular drugs. In 2001, 2.8 percent of high school seniors reported use of barbiturates. Barbiturates, GHB (gamma hydroxybutyerate), and benzodiazepines are all used in the club and rave drug scene. Often users in these settings do not know that barbiturates and other sedativehypnotics have been added to a drink. 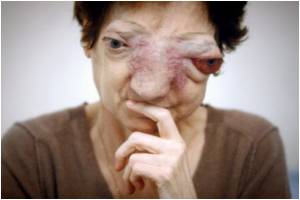 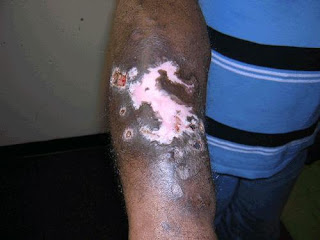